The Market Just Showed Us Its Biggest Tell

On Sunday, I was sitting around watching some football, scrolling through Twitter…

I must admit, I’ve never seen so many blown calls from either.

Let’s focus on the “FinTwit” side of things for the sake of this community.

The amount of bearish predictions for a complete financial crisis was off the charts, and I can understand the sentiment.

I, like many of you, have been worried the market was on the cusp of something breaking. Over the past two weeks, we’ve seen multiple currency interventions, a bailout of British pension funds, and a blow out in bond spreads.

However, as the old saying goes, if everyone is predicting the same thing, the opposite will probably happen.

Actually, I’m not really sure that’s an old saying, but it is the basis for using sentiment readings as a contrary indicator. We’ve certainly reached an extreme in bearishness whether it be measured by Investor Intelligence polls, the put/call reading, or the VIX.

And yet, maybe the biggest tell that we reached some form of capitulation is that investors were saying they were bearish they were not acting that way…

In fact, they were even continuing to buy the dip.

According to ETF.com, for the week ending September 16, U.S.-listed ETFs brought in nearly $25 billion, the second highest amount since August.

We also saw a surge in bearish positions and protective hedges.

Wall Street short positions increased to levels seen during the pandemic low, the currency crisis of 2011, and the financial crisis of 2008. 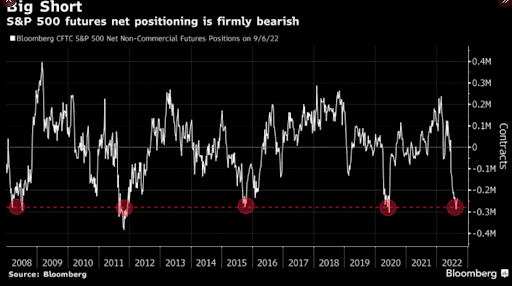 Retail investors, who had previously only known buying YOLO calls, suddenly found the idea of buying puts an attractive idea. Last week, some $18 billion in put premium was purchased.

As you can see, that is an off-the-charts number… 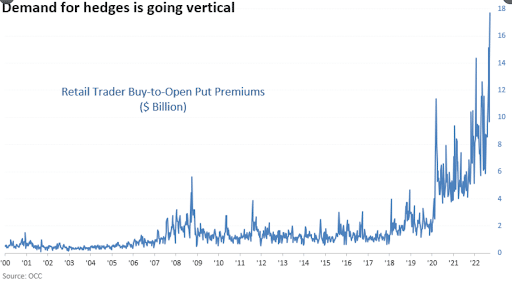 While that might all seem like enough due diligence to formulate an opinion, I still maintain my conviction in my market outlook.

While this is not financial advice, I maintain that SPY eventually falls back to the pre-pandemic high around $340.

This equates to a near 10% decline in SPY. In the current market, we’re just a couple of good selloffs away from reaching this number.

However, we must respect the June low as that area has held strong while the market has bounced several times at the level, failing to make a meaningful break each time. As a result of this bearishness, there are a bunch of people caught offsides scrambling to reverse course, covering shorts, and adding long exposure before they miss the move.

On Friday, Options360 had established a combination trade in the Invesco QQQ Trust Series 1 (QQQ) of both bullish and bearish components.

The bullish side is obviously working, and we’ve already made two adjustments to take some money off the table. Now, I could use a bit of a pullback to work the bear side.

BUT… to get the all the education that would teach you why to put this trade on, and perhaps more importantly, how to manage this trade, you’ll have to join the Options360 community.

Like a sniper team, we watch and wait for our time to strike fear into the hearts of the market makers.

Here, you and I trade together…

Steve Smith have been involved in all facets of the investment industry in a variety of roles ranging from speculator, educator, manager and advisor. This has taken him from the trading floors of Chicago to hedge funds on Wall Street to the world online. From 1987 to 1996, he served as a market maker at the Chicago Board of Options Exchange (CBOE) and Chicago Board of Trade (CBOT). From 1997 to 2007, he was a Senior Columnist and Managing Editor for TheStreet.com, handling their Option Alert and Short Report newsletters. The Option Alert was awarded the MIN “best business newsletter” in 2006. From 2009 to 2013, Smith was a Senior Columnist and Managing Editor for Minyanville’s OptionSmith newsletter, as well as a Risk Manager Consultant for New Vernon Capital LLC. Smith acted as an advisor to build models and option strategies to reduce portfolio exposure and enhance returns for the four main funds. Since 2015, he has worked for Adam Mesh Trading Group. There, he has managed Options360 and Earning 360, been co-leader of Option Academy, and contributed to The Option Specialist website.

It's not goodbye, it's hello Magnifi!

Magnifi Communities does not endorse this website, its sponsor, or any of the policies, activities, products, or services offered on the site. We are not responsible for the content or availability of linked site.

Take Me To Magnifi